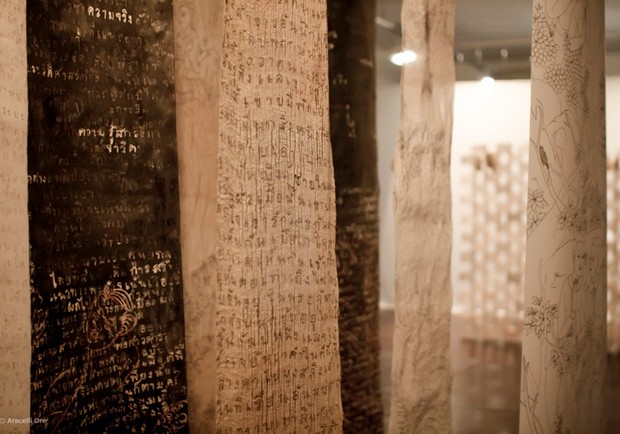 I was sitting in a massive auditorium surrounded by various conversations and hundreds of people I have never seen before. They all look different from me, their face, colour of eyes, skin, hair and personality. Am I an alien? I imagine myself with big yellow eyes, soft horns, pink skin and a fluffy body like a Teletubby; how can I survive in this situation? Sometimes, I cannot breathe when those humans come and talk to me. My vision is a blur, my mind has gone somewhere…I am speechless. I believe that everyone has experienced a moment of alienation before, one way or another. However, I really want to know what those people think about an alien like me.

I met Thai-Australian artist, Phaptawan Suwanakudt, via my sister’s suggestion. I wanted to know how she established herself in this country, and her attitude about life. But more importantly I wanted to know, “Did she feel alien?” At that time, her artworks were exhibited at the Museum of Contemporary Art for the Biennale of Sydney, 2012. Her artworks looked very simple and were made with everyday materials like paper, woven fabric, and shredded silk; it gave me a sense of home. I came up with three easy adjectives to describe her work: comfy, cosy, and homey. In Thai it is “ละมุน อบอุ่น เหมือนบ้าน.” Viewing Pee Chang’s works gives me sense of home, and although she is a stranger to me, I felt like I understood and knew her just by looking at them.

I called her “Pee Chang.” Chang is her nickname. It means elephant and Pee is the word Thai people use for someone who is older or someone whom we respect. In Thai society, female artists are rare to see. It is rare to see a woman work as a mural painter in temples. This is possibly because Thai people believe that women are not supposed to be close with the monks, or that this task requires strength and endurance which is appropriate for men. Pee Chang said that “there are many visitors in the temples who thought she was a man, owing to her waist-length hair, her height and the manner in which she worked”. Having painted the temple’s ceiling and a massive wall, Pee Chang sat on a scaffold on which women are usually not allowed. She gained acceptance from a well-known Tankudt group, which is her father’s mural painting team, to continue working with traditional Thai mural painting. After her father passed away, Pee Chang led ten male painters to complete her father’s unfinished work, while working a part-time job as an English tutor and a magazine translator in order to earn money to care for her family. She became the family leader instead of her father, which is strange in a Patriarchal society in traditional Thai culture. It is not easy to earn money from art and in Thailand if you are an artist you are considered strange. ศิลปินไส้แห้ง , is a Thai idiom used to describe a poor artist who does not have enough money to even afford food. Painters and artists are seen as unsustainable careers in Thai society, especially for women. 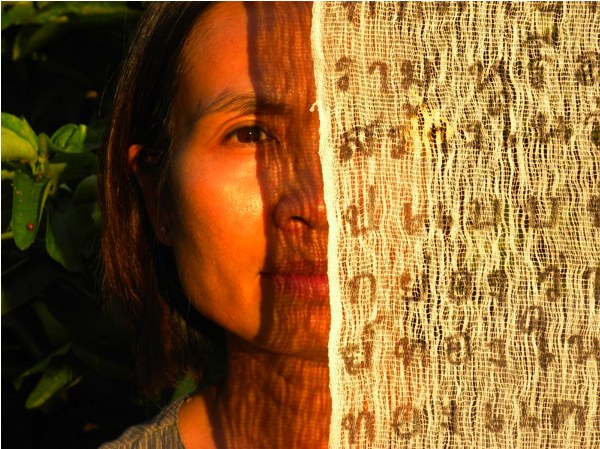 The tiny backyard in her traditional Australian-style home in Lewisham is filled with a traditional Thai vegetable garden. Pee Chang’s studio is hidden in the bottom of the home. Internal walls were replaced by thousands of books organised properly in different sections: Thailand, Japan, China and Europe. When Pee Chang first came to Sydney, she travelled around with her palm diary and instinctively scribed the Thai names of flora and fauna she found in the townscape. It was one of her processes to feel familiar with this community. That method became her signature which appears in many of her artworks. She employs the notion of catching every moment in order to merge human and alien together.

The process of writing as a means of observing a wakeful moment is a practice of Buddhist meditation in which she was trained by a monk during her childhood. Pee Chang applies mindfulness during her working process; this meditation embeds the Thai way of life. Every time we gain a moment we lose another, which is why we need to concentrate on the present.

Her artwork shifts from temple walls to canvas and twists back to shredded silk and local Thai woven fabric coupled with mixed material installations. These distinguished mediums portray her journey of life, experiencing unfamiliar contexts and struggling to conserve her identity and establish her own Thai-Australian contemporary art. Pee Chang’s artwork reminds me of my hometown and alleviates the loneliness in this country. I recall when she spoke to her son and daughter in Thai, but they both answered her in English. Only her husband speaks Thai to her; however, they laugh together, live together and help each other. At that moment, I forgot the feeling of alien. I realise that ‘Alien’ is just the word created to divide people into different groups; it never encourages us to live happily. Pee Chang uses art to express the absence of alienation and suggests the healthy way to survive in multi-cultural society. She stated that she “makes art because it is important for her life”. It is the place where she can lie down, relax and explore her life. As a woman in a Patriarchal society, as a Thai and Asian lady in western society, Pee Chang, Phaptawan Suwannakudt, has gained many awards, a deserving reputation and has had many solo and group exhibitions in Thailand, Europe and Australia. There is no difference or alien in Pee Chang’s dictionary, humans find their own way to communicate with each other. Alienation is just a condition set in one’s imaginative world. It can be changed, redefined or blurred to create a healthy community where there are no alien invasions and cultural differences are not taken into account.