The experience of the art of the 19th Sydney Biennale ignited a creative spirit in me the moment I alighted the ferry at Cockatoo Island. As the light of the early morning shone from the east, bathing the grand buildings that inhabit the island, I was inspired, camera in hand and scrambling over some neglected sandstone ruins, to capture the shadows cast from a nearby stairwell. Satisfied I had soothed the budding photographer inside me, I was ready to explore the rest of the art on the island. When I returned home later that day, reviewing the exhibition guide, it was only then that I realised the ruins that I so intimately crawled all over to document with my lens were, in fact, the very robust installation, Ruins, by Joseph Griffiths.

This realisation made me consider the way in which we approach art as an audience. Good art will be admired and remembered. Great art will allow the viewer to interact with it in some way (emotionally or physically) and be unforgettable. I had not only interacted with Ruins but had been inspired by the work to pursue my own creative endeavor and I will certainly never forget my introduction to the 2014 Biennale of Sydney. To me, this is what the best art should achieve, it should stay with you to be remembered at another time, like a beautiful piece of music or the smell of grandma’s baking, the thought of it should take you back to that moment or better still, the memory should, inexplicably, be awakened by the experience of an emotion, comparable to the feeling of déjà vu.

Juliana Engberg, the Artistic Director of this year’s Biennale, understands this, stating in the exhibition guide that the title of the Biennale, You Imagine What You Desire, “acknowledges the transference of creative energy between the artist and their audience”. Engberg is acutely aware of what the audience wishes to take away from the Biennale, however it is not something that has been successfully achieved as the “transference of creative energy” was often lost among the interruption to the flow of the Biennale journey. These interruptions occurred through the overuse of uninspiring video art works and the curatorial strategy of turning off the lights and displaying another unimaginative piece of video art in a darkened room.

As a teacher of visual arts and an art administration student, I have been fortunate enough to have travelled the world, discerning art at some of the most impressive collections, museums, galleries and events, from the Musee d’Orsay to MOMA or the Venice Biennale to Istanbul Modern. When I consider works or forms of art that have been influential or changed my perspective of art, Video Art has been the one that has polarized me the most. As a member of generation Y, having grown up with access to video on demand, video art, particularly in the context of a curated exhibition, needs to be instantly engaging, shocking or simply presented in such a way that allows the viewer to interact with it for it to be memorable. If the video artwork or unique presentation method fails to leave the viewer with a lasting impression or memory to ponder at a later time and discuss with fellow art aficionados, then perhaps it would be better suited to YouTube or Vimeo rather than being displayed at one of the most important events on the international art calendar?

Carriageworks, another site for the Biennale of Sydney exhibition, demonstrates my disappointment with some of the video art and ineffective curatorial ideas of this year’s Biennale, however also displays some of its finest. The space, while vast, is set up in a large horseshoe shape and is seemingly dedicated to the display of video art where the audience shuffles precariously around, from one dark space to the next. Ann Lislegaard’s video work, Time Machine, where an animated fox stutters out dystopian rhetoric based around H.G Well’s novel of the same name, is clever, however the poorly rendered, clunky animation and low projection angle is difficult to watch. Moving through to the next few rooms, the light became so low, that I resorted to navigating under the light of an iPhone after bruising my shin on a low lying bench, an experience that left me with the desire to continue through to the other installations and to come back to the video art works when my eyes had adjusted to the light. After admiring several large-scale sculptural works, I ventured into the ‘Long Program Theatre’. This makeshift theatre is a small, impersonal room screening over eleven hours of video art with each work averaging forty minutes in duration. So protracted and numerous were the works in this room that they were rotated over a two day program schedule with each film having a dedicated time slot every second day. This curatorial strategy filled me with melancholy, as I would love to dedicate two full days to viewing the films deemed significant enough to be shown here, unfortunately, I couldn’t afford the time to sit through the only one that was screening during my entire Carriageworks experience. At ninety minutes long, Renzo Martens Episode III, was as engaging as my neighbor’s home video of his trip to Africa. Obligated by the enthusiasm of the gentlemen I share a wall with, I politely sat though the duration of his experience, a feeling I didn’t share with Marten’s work. Sadly, the issue of the continuing war in the Congo is an important message to be sharing with the world, however this work left me disengaged and further desensitised to the tragedy unfolding.

The most rewarding experience of this work is that it educed a memory in me of the most emotionally evoking video art installation I have ever experienced: Richard Mosse’s The Enclave is the quintessential video art experience. The first time I was exposed to this work was at the 2013 Venice Biennale where it drew a similar reaction from all those that experienced it with me. The Enclave is a beautiful, confronting and truly unique installation. The mesmerizing red hues replacing the green through the use of ultraviolet film, draws the viewer into the emotionally provoking cinematics.  The projection onto multiple, slightly offset screens, is disorienting and adds to the sense of being immersed into the conflict zone. Mosse creates a hypnotic experience that forces you to witness the reality of the situation, beyond what we often become desensitized to in the mainstream media.

The curatorial practice of multiple screens being displayed in one viewing area diverts audience attention from one screen to the next, so they can also witness the emotional response of others as they view an opposite work. This interaction, that video art installations so often neglect, is an instrumental aspect of art appreciation. The video art exhibition area within Istanbul Modern is arranged in a similar way with large screens hung diagonally and zigzagging along the center of the room with the work projected on both sides and across the walls behind. This vibrant and exciting display area engages the audience and allows the journey through the space to be uninterrupted, socially engaging and memorable.

Creating a memorable experience is the key to great art and contributes to the feeling of déjà vu that is so difficult to create. As I stumbled through to Persijn Broersen and Margit Lukács’ contribution to the Biennale, I was initially disappointed by the feeling that I had seen it before.

As the beautiful and realistic imagery conjured feelings of my childhood spent watching Disney movies, I was delighted after reading the label, again under the glow of my iPhone, that Mastering Bambi was in fact a tribute to these early animations, replicating the scenes from Bambi in full HD digital animation. Although insipidly projected upon a wall in a darkened room, it was the first emotional interaction I had with a video art work at the Sydney Biennale. Lifted by the experience of Broersen and Lukács’ work, I found my way to the other side of the exhibition space by following the glow of the five large LED televisions in portrait orientation and arranged in a ‘flying V’ formation as though migratory birds. The screens depict full frame close-ups of Hollywood actors running, on an endless loop. The screens have been cleverly displayed with Cary Grant’s character Roger Thornhill from the Hitchcock movie North by Northwest leading the charge. As he runs, turning to look for the approach of the low flying crop duster that has been skillfully edited out, we realize that those who are running behind him might actually be chasing him. The development of the silent narrative in this work is entertaining and clever, instantly engaging the viewer as we wonder why Forrest Gump or Indiana Jones may be trying to run down Roger Thornhill and we question the relevance of these famous characters when removed from the original context of the films.

While the use of established characters cut from famous films creates an instant narrative, as we incorporate their familiar persona into the work, the development of a new character in the often short timeframe of video art can be a challenge. Henry Coombes’ work I am the Architect, This is not Happening, This is Unacceptable, introduces us to the instantly loveable character, Clive, a retired architect struggling with emerging technology. Clive’s awkward dancing and powerful performance interacting with his new surroundings drew me in and absorbed me into his discomfort, as he is sucked into the dystopia of the modernist utopia he had created. Coombes incorporated the skill of his father, a retired architect, to produce some of the props in the work and with the addition of a well-loved couch to the viewing area, a personal connection was felt throughout the screening. This allowed me to feel comfortable and at home, increasing my engagement with the installation as though I was in the very room where Clive’s descent begins. 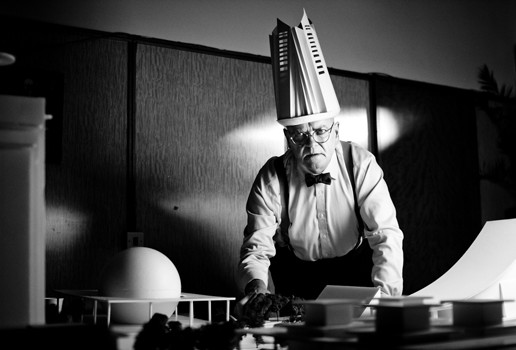 Henry Coombes, I am the Architect, This is not Happening, This is Unacceptable, 2012 (production still), single-channel video, 12:07 mins, black and white. Courtesy the artist. Photograph: Paul Whyte Commissioned by House for An Art Lover, Glasgow, in association with Glasgow International Festival of Visual Art and Creative Scotland. Courtesy of 19th Biennale of Sydney (2014).

This final installation in the Carriageworks site is again displayed in a small, dark room, however my enjoyment of it through Coombes standout directing along with some of the more unique video art and curatorial presentation across this years Biennale inspired me to consider the way in which video art could be displayed in a more personal, emotionally engaging and socially interactive way.

These are the elements that allow the visitor to create the memories that they will continue to engage and interact with, long after their initial experience. The feeling of déjà vu upon being reminded or inspired by a similar experience or emotional response is rare, however it is always a welcome sensation. The future of art is going to include video works and as the newest generation of artists emerges, I am excited to discover how they will continue to create the new pioneering works and how they will be imaginatively displayed within an evolving Video Artopia.